When The People Move The Music Moves Too 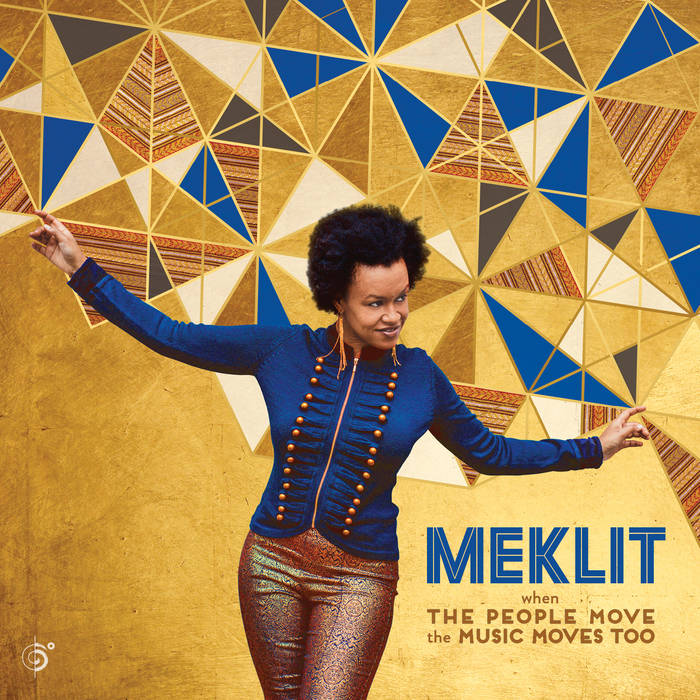 78spinner "Leonard Cohen taught me words are your currency" I'm hooked. The positive energy is undeniable. Favorite track: I Want To Sing For Them All (featuring Andrew Bird).

zerode Such a fresh, authentic sound - full of joy and soul and jazz. Favorite track: I Want To Sing For Them All (featuring Andrew Bird).

There are many well-appointed rooms in the mansion that is Meklit and her breathtaking new album sounds at home in every one. The Ethiopian-born Oakland- based artist
has belted “Cold Sweat” with James Brown saxophonist Pee Wee Ellis, co-founded the visionary pan-African Nile Project ensemble, and lectures widely about liminal identities
as a TED Senior Fellow. Along the way she’s released a series of disparate recordings documenting her evolution as a songwriter, vocalist and bandleader. When the People Move,
the Music Moves Too, slated for May 5, 2017 release on Six Degrees Records, reveals her startlingly beautiful new sound that seamlessly merges East Africa and the African
diaspora via an intimate, rhythmically charged body of songs recorded in Addis Ababa, Los Angeles, New Orleans and San Francisco.
A collaboration with Grammy Award-winning songwriter and producer Dan Wilson (Adele, Dixie Chicks, Taylor Swift), the album is built on Meklit’s jazz-steeped working-band
featuring bassist Sam Bevan, drummer Colin Douglas, and Marco Peris Coppola on frame drum tupan and other hand percussion. Meklit accompanies her translucent,
soul-sated vocals on guitar and the six-string krar, an Ethiopian lyre, while Howard Wiley provides pleasingly pungent counterpoint on tenor and baritone saxophones.
She’s joined by a far-flung array of masters, including Andrew Bird on violin and whistling, the Preservation Hall Jazz Band horns, plus a triumvirate of traditional Ethiopian
musicians, and top-shelf players from LA and the Bay Area. All of these deep musical currents flow into Meklit’s shimmering, dance-inducing sound, which turns the San
Francisco Bay Area into a jazz outpost of Ethio-Crescent City soul. As the album’s title suggests, Meklit makes music about movement, about bodies transporting culture through
space and time, and the power of sound to set people and social movements in motion.
“This is what happens when an Ethiopian family comes as refugees to the United States, and makes social and cultural contributions in all kinds of ways,” says Meklit. “It’s
impossible not to think about where American culture is going. Who are we? How can we have a more inclusive society? This is Ethiopian-American music, and it’s feels like
what I’ve been trying to do dreaming up for a decade.”
Since the release of her acclaimed 2010 debut album On A Day Like This… (Porto Franco Records), Meklit has become an international force. As a TED Fellow, she launched the
Arba Minch Collective, a group of expat Ethiopian artists devoted to nurturing ties to their homeland by collaborating with traditional and contemporary artists back home. She
also delved into American soul music with rising Oakland singer/songwriter Quinn DeVeaux on 2012’s Meklit & Quinn (Porto Franco Records), putting an indelible stamp on
songs by Lou Reed, Sam Cooke, Arcade Fire, Stevie Wonder, and Talking Heads. Her soul queen coronation took place on stage at Yoshi’s, where she made a memorable
appearance as part of saxophonist Pee Wee Ellis’s show “Still Black, Still Proud: An African Tribute to James Brown.”
Meklit’s Six Degrees debut, 2014’s We Are Alive, catapulted Meklit into global prominence as a singer/songwriter, garnering rapturous reviews and an uproariously entertaining
video “Kemekem (I Like Your Afro).” At the same time she was co-founding the visionary Nile Project with Egyptian ethnomusicologist Mina Girgis; a collective ensemble bringing
together over 30 East African artists who hail from the 11 countries traversed by the Nile, the organization has evolved into a creative force introducing new ideas for
preserving and protecting the life-giving river and the peoples who depend on it.

Meklit has an exceptional ability to capture an entire range of human emotions, sometimes
in a single song. Feelings of longing and loss mingle with an uplifting sense of hope. One thing that runs throughout all of
her work is that critical essence of humanity, the totality of who we are as creatures
sharing a planet together. ... more

Bandcamp Daily  your guide to the world of Bandcamp